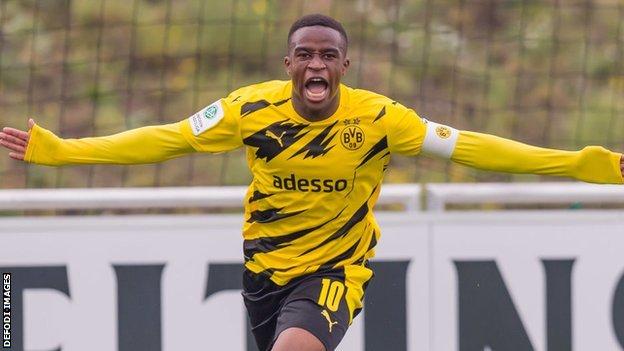 Youssoufa Moukoko once told reporters: "It is my goal to become a professional player in Dortmund, capture the Champions League with Borussia, and win the Ballon d'Or."

He was 13. From anyone else at that age, such talk might have seemed naive, perhaps arrogant. But those who listened to Moukoko thought he might be right.

Today, Moukoko turns 16, and is an international sensation thanks to his ridiculous goal rate - he has scored 141 times in 88 youth matches for Borussia Dortmund since 2017.

In the summer, Dortmund selected Moukoko for their official Bundesliga squad, knowing they would have to wait a couple of months before the young striker would be eligible to play. They convinced the German Football League earlier this year to for players in the top two divisions from 17 to 16.

Moukoko has a chance to break two records in the next week. If he features against Hertha Berlin in the Bundesliga on Saturday, he will become the youngest person ever to play a professional match in Germany. If he faces Club Bruges three days later, he will become the Champions League's youngest player.

Born in Yaounde, Cameroon, he grew up with his grandparents and a passionate love for football.

When he was 10, he moved to live with his father, who had been based in Germany for many years, and joined the youth set-up at St Pauli.

Moukoko went to his first training session in running shoes, as he wasn't used to organised football. But that didn't prevent him from scoring goals right from the beginning.

"He is a huge talent and makes decisions at an impressive pace," Guido Streichsbier, coach of Germany's Under-20s, said.

"I'm convinced that Youssoufa has the football IQ to find spaces so that he won't be dismantled by experienced defenders. It will be important that he moves in specific zones to stay away from the physical fights."

Dortmund first-team boss Lucien Favre added: "You don't know which foot he uses to play. He is a left-footer and a right-footer. He is very efficient."

'He hasn't had any rainy days, but they will come' 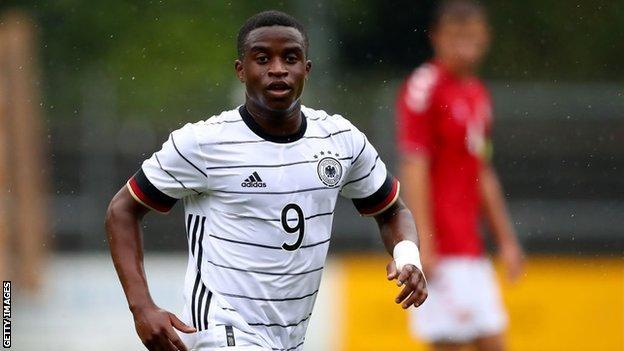 Last year, sportswear company Nike signed Moukoko to a long-term deal. And the spotlight has been on him from very early on. So both Borussia Dortmund and Germany's football asoociation have opted to take things slowly.

"After Youssoufa's first international games at the under-16 level [in 2017], the hype was at times so huge, that, together with Dortmund, we decided to let him make his next steps solely with his club," Meikel Schonweitz, the head coach of Germany's youth teams, said.

The German FA didn't select Moukoko for any more youth matches until this year, when he made his debut for Germany's Under-20s.

"The hype doesn't do anyone any favours," said Stefan Kuntz, coach of Germany's Under-21s. "The first low is always the toughest."

Moukoko has experienced people at his side, including those who know the pain of not fulfilling early promise.

One of his closest advisers at Dortmund is assistant manager Otto Addo, a promising midfielder in the late 1990s and early 2000s whose ambitions were ultimately thwarted by a succession of knee injuries.

Lars Ricken, head of Dortmund's youth academy, was the club's wunderkind in the 1990s. When he scored a 30-yard chip in the 1997 Champions League final win over Juventus, Ricken was tipped to become a global superstar. Injuries wore him down and destroyed his ambitions.

"We don't have to cram the rucksack he has on his back even more," Ricken said. Others agree.

"As of yet, the sun always shines for Youssoufa. He hasn't had any rainy days, but these rainy days will come," Nuri Sahin, a former Dortmund midfielder, told German football magazine Kicker.

Sahin's record as the youngest to ever play a Bundesliga match will soon be broken by Moukoko. The two have been in touch for a few years.

'I will continue to do my thing - that is my passion'

Moukoko has already had to deal publicly with abuse and criticism.

He started at Dortmund's Under-16s at the age of 12, and proved a prolific scorer against much older defenders. People started questioning his age. National newspaper Bild asked if it could be true that a 12-year-old was so dominant.

His father presented a birth certificate that was issued by the German consulate in Yaounde, but doubts have continued to follow him. "It was hard to deal with all these stories," Moukoko said in 2018. "It is not my fault that things go so well."

"He was challenged mentally early on," Michael Feichtenbeiner, his former coach with Germany's Under-16 team, said. "The rage about him was extreme, and the public speculation about his age often pushed aside the appreciation of his actual performance on the field."

A few weeks ago, he again dominated a youth game, this time the derby between Dortmund's and Schalke's Under-19s.

After scoring his third goal, spectators were screaming that they would "break all your bones" and Moukoko should "lie down in your grave". The clip went viral, while Moukoko addressed the situation in the most professional way possible.

"I will continue to do my thing. That is my passion. That is what brings me joy," he wrote on Instagram. He also addressed those who insulted him by saying that they "can hate and slander me, but you can never hold me down."

'Moukoko is much better than I was at his age' - Haaland

Moukoko's coaches and team-mates stress how professional and determined he is. "I see him being extremely focused," Ricken said.

"I don't know a player who invests so much in training and during the matches."

Club officials are convinced that Moukoko has earned his spot in the first team not only because of his talent but also because of his work ethic. They didn't sign a back-up for striker Erling Braut Haaland during the summer transfer window, because they trust Moukoko to become exactly that in the near future.

Haaland himself is a big fan. "Moukoko is much better than I was at his age," he says. "I have never seen such a good 15-year-old in my life."

Dortmund know that they will walk a tightrope with him. The hype will only get bigger if he succeeds in the Bundesliga right away.

Moukoko, however, has proven that he can deal with the attention and stay focused on what he loves most - playing football and scoring goals.