Why the US election could decide battle against climate change

Why the US election could decide battle against climate change 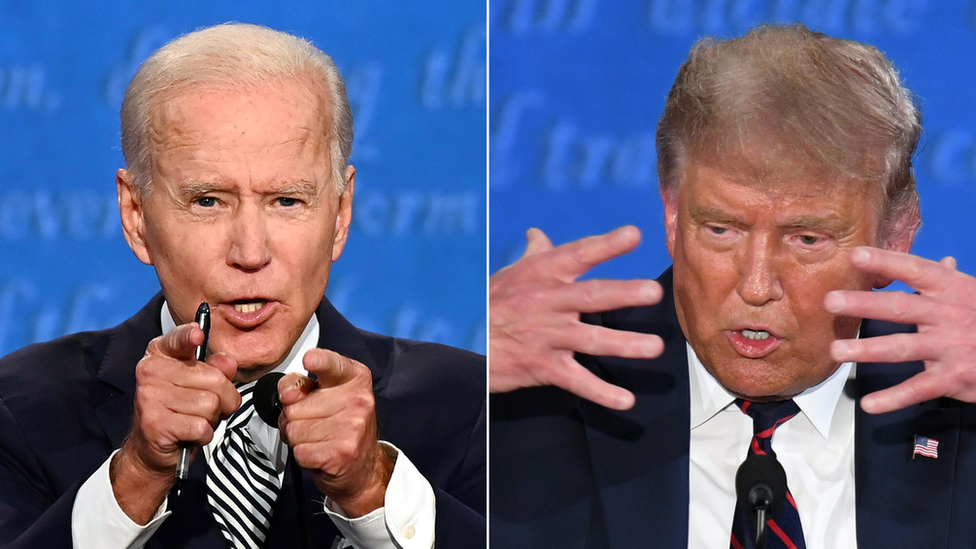 Who occupies the White House for the next four years could play a critical role in the fight against dangerous climate change, experts say. Matt McGrath weighs the likely environmental consequences of the US election.

Scientists studying climate change say that the re-election of Donald Trump could make it "impossible" to keep global temperatures in check.

They're worried another four years of Trump would "lock in" the use of fossil fuels for decades to come - securing and enhancing the infrastructure for oil and gas production rather than phasing them out as environmentalists want.

Joe Biden's climate plan, the scientists argue, would give the world a fighting chance.

In addition to withdrawing from the Paris climate agreement - the international pact designed to avoid dangerous warming of the Earth - President Trump's team has worked hard to remove what they see as obstacles to efficient energy production.

Over the past three years, more than 160 significant rollbacks of environmental regulations. These cover everything from car fuel standards, to methane emissions, to light bulbs.

This bonfire of red tape has occurred at the same time that the US is reeling from several years' worth of severe wildfires in western states. .

So where are we after four years of Donald Trump - and where are things likely to go after the election on 3 November?

What is Trump's position on climate change?

"Trump believes that regulations are all cost and no benefit," says Prof Michael Gerrard from Columbia University in New York.

"He denies that there really is such a thing as anthropogenic climate change, or at least that it is bad. He believes that if you cut back on regulations of all kinds, not just environmental, but also occupational and labour and everything else, it'll create more jobs." 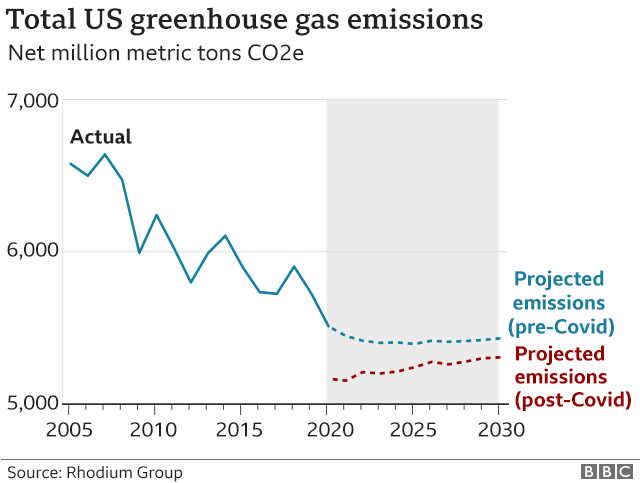 Critics say the rollbacks on environmental regulations are part of an agenda to remove any reference to climate change across the federal government.

"The Trump administration has done everything they can to deny the science and denigrate scientists," says Gina McCarthy, the former head of the Environmental Protection Agency (EPA) and now the president of the .

"They have really done everything humanly possible to try to convince people that what they see and feel and taste just isn't happening in front of them." 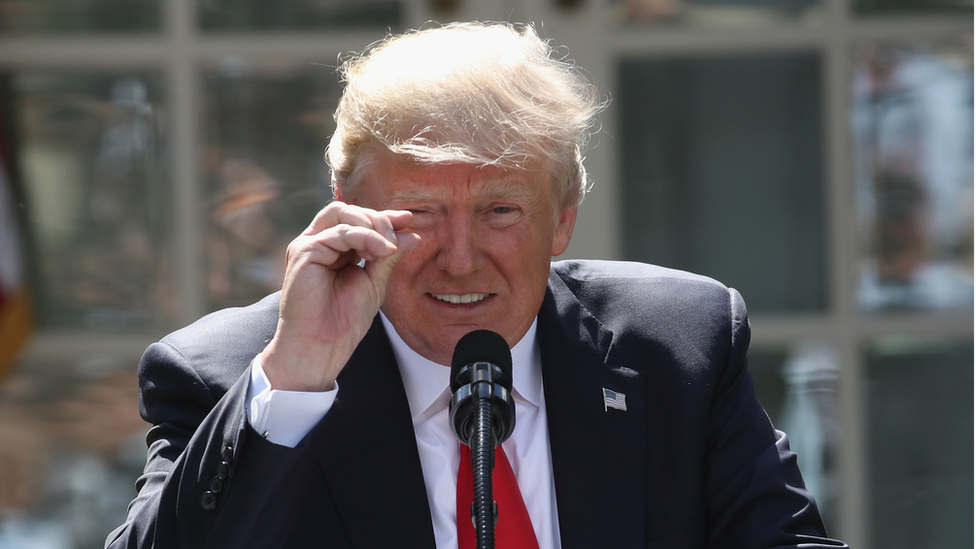 What effect have the rollbacks had?

President Trump's supporters will say that his strong support for fossil fuels has been a success. Thanks to fracking, the US late last year. Fracking is a set of techniques for recovering oil and gas from shale rock.

But when it comes to coal, the story is different. Despite the administration's efforts to undo regulations, with around 5,000 fewer coal-related jobs now than when Donald Trump was elected.

For many of those backing Trump, his actions on the climate are consistent with boosting energy production and keeping the economy growing. 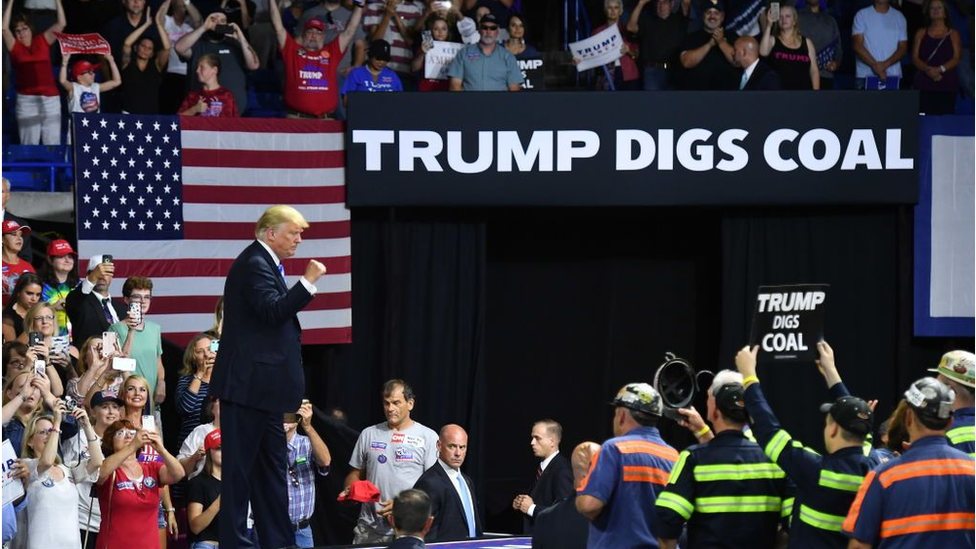 Others argue that Trump's war on environmental regulations has nothing to do with economics at all.

"Trump is convinced that climate change is a culture war issue that ignites the resentment of his far right base," says Paul Bledsoe, who served in the Clinton administration and is now an adviser to the Democrat think tank, the .

"So he sees this as a cultural effort to ignite grievance among his base. It has no other function for him. He doesn't care about anything else."

How will leaving the Paris deal affect things?

Pulling out of the Paris agreement was a to the rest of the world that the US no longer shared the international consensus on climate change.

When announcing the pull-out, President Trump spoke of re-negotiating the agreement, but nothing has come of that idea.

Some observers believe that US actions have made it easier for other nations, like Brazil and Saudi Arabia, to . 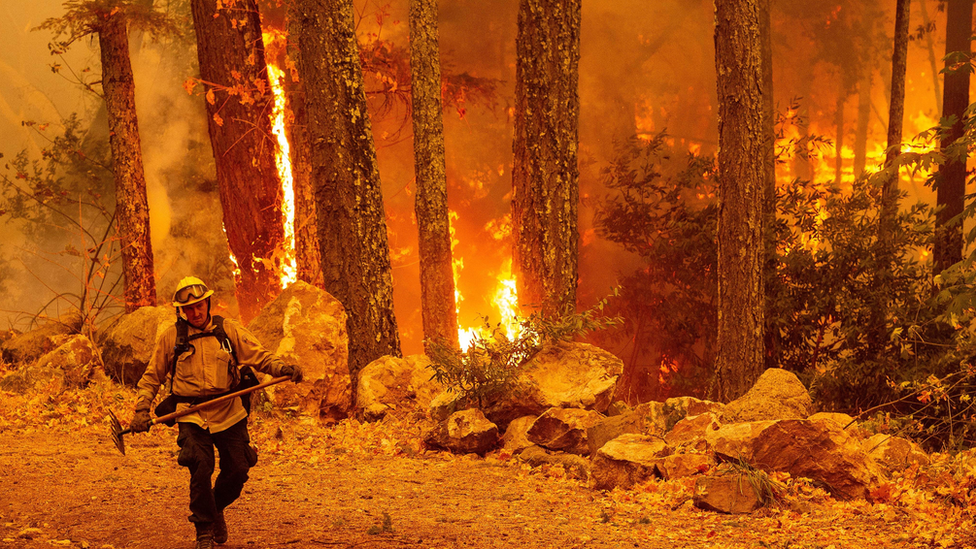 "Right now, we're a pariah, And this is the most embarrassing and shockingly bad time that I could ever imagine for the United States," says Gina McCarthy.

"And it's all because we have a president who simply doesn't give a damn about people. He just gives a damn about his own base, and how it feeds his own ego."

If Joe Biden wins, it is likely he will reverse the pull-out from Paris as soon as possible. Re-joining the pact requires only a month's notice.

Is Trump in tune with his base on climate change?

The president's decision to pull the US out of the Paris agreement will take effect on 4 November, one day after the election.

However, opinion polls show that and conservatives are taking a different position to the President on climate change. 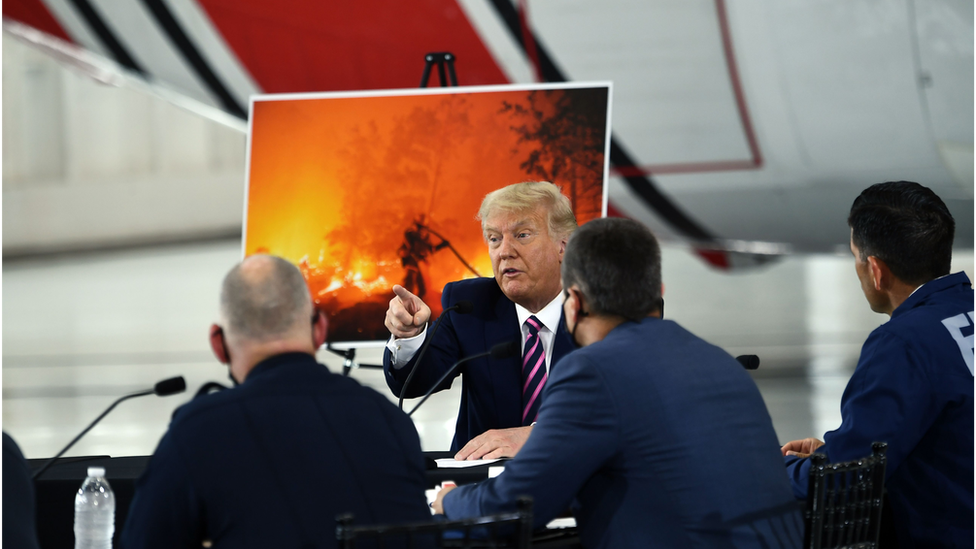 But many still support his decision to leave the Paris pact.

"What I've found is that really big goals and really high targets don't really mean anything if you don't actually have a plan to achieve that goal," says Danielle Butcher who describes herself as a young conservative with the .

"We've got China saying that they're going to reduce their emissions by this year. And they're financing coal plants all around the world."

"Even though the Paris Agreement may sound good, there has to be follow through, right?"

What happens if Trump is re-elected?

As well as confirming America's departure from the Paris deal, a win for Trump will likely see further efforts to step up fossil fuel production. This could have serious consequences for global temperatures.

"The 1.5C temperature target is very difficult to achieve right now, although it is theoretically possible," says Michael Gerrard.

He's referring to one of the goals of the Paris agreement - a global rise in temperature of 1.5C is regarded as a kind of gateway to dangerous levels of warming.

Two years ago, concluded that keeping the temperature rise under this threshold would make a huge difference to people and to nature, compared to letting them increase by 2C (which previously regarded as this threshold for many years).

"If Trump is re-elected, I think it goes into the realm of physical impossibility," says Prof Gerrard.

"We'd have to wait another four years for another election to try to rectify that. But by then, a lot more fossil fuel infrastructure will have been locked in and a lot more greenhouse gases will have gone into the atmosphere. So, it would be very bad news for the climate indeed."

How are US cities and regions responding?

In some parts of the US, the lack of action from the White House on climate change has served as a call to action.

For residents in the coastal city of Charleston, South Carolina, questions of climate and sea level rise are high on the list of political issues.

Water levels in Charleston harbour used to rise about 2.5cm every decade - now they're going up by that amount every two years.

With a pressing need for new sea defences, the for their role in producing the carbon that is linked to the rising waters. 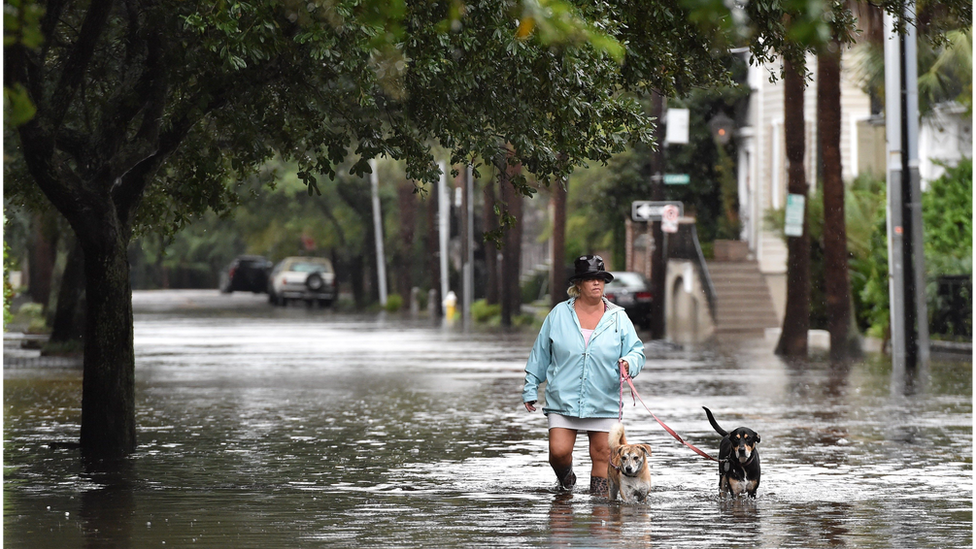 "Flooding is at this point an issue on 100 days of the year," said local climate activist Belvin Olasov.

"This situation calls for leadership and there is currently a huge vacuum, because of the President that we have."

"So you have a city government taking on a giant conglomeration of oil corporations because nothing is being done on the federal level."

"It is an unusual situation that we've been pushed into."

Many states and regions have pushed ahead with climate action, but this has its limits. For example, road transportation is responsible for around one third of US carbon emissions but car fuel standards are set by the Federal government. While the Obama administration sought to strengthen them significantly, President Trump has watered them down.

How does Biden differ from Trump?

Joe Biden says that his would see the US energy sector go carbon-free by 2035. This would allow the country to become a net zero emitter by 2050.

Achieving net zero means that any carbon emitted by industry, transport or other sources is balanced out by removing an equivalent amount from the atmosphere, through, for example, planting forests.

Mr Biden has ambitious ideas to revolutionise transport in the US using electric vehicles and trains. He also wants to build 1.5 million sustainable homes and housing units.

His plan would not just benefit the US, say supporters, it would help keep global temperatures down.

"This is the first election ever that really may determine whether we can prevent runaway climate change," says Paul Bledsoe. 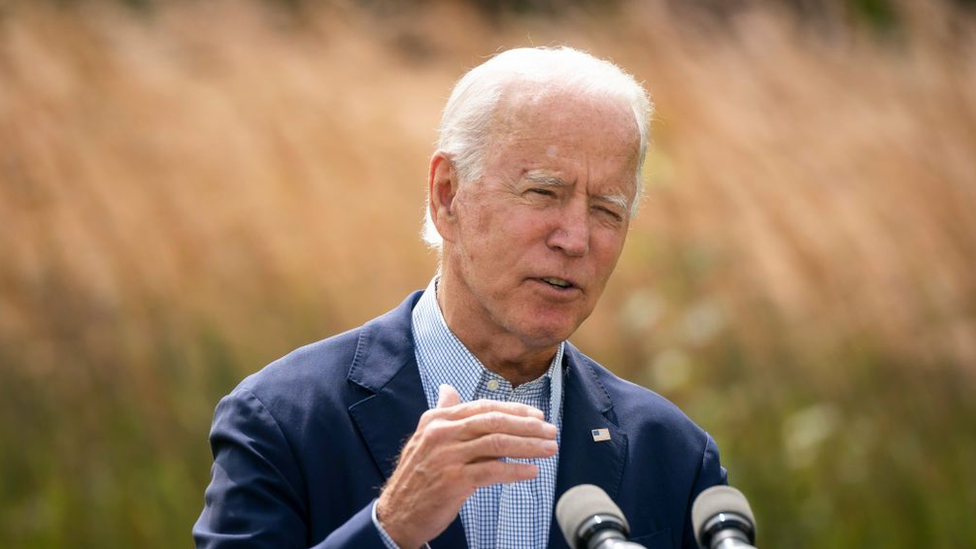 "Joe Biden is proposing that the US adopt climate change tariffs on nations who do not reduce their emissions. Biden's international climate plan, if anything, is even more ambitious than his domestic plan. So the contrast could not be starker."

President Trump has accused his opponent of wanting to ban fracking. But Biden says it should continue as the US transitions to a green economy.

The oil and gas boom opened up by fracking - including in battleground states such as Pennsylvania - means thousands of jobs hang in the balance. The candidates are aware of the need to tread carefully - irrespective of their more general positions on climate change.

Where do religious groups stand on the climate?

Evangelical Christians are among the religious groups to have strongly supported President Trump. .

But younger members of the faith are less enchanted with the president, especially on the topic of climate change.

Emily Robertson is a 21-year-old student at Covenant College in Lookout Mountain, Georgia, and a first time voter in this election.

She says that if she could have voted last time round she would probably have voted for Trump, like her parents did.

But her growing awareness of the climate change issue has persuaded her to vote for Joe Biden this time.

Despite growing recognition of this planetary problem, she believes that most of her fellow young Christians will still back President Trump.

"On social media platforms, I have seen a lot of young evangelicals move toward voting for Biden, but those are in select circles," she says.

"So for some people, perhaps, but honestly, just based on some people I have talked to, even though they care about climate change, I don't believe they care enough to still vote for Biden rather than Trump."