Last updated on .From the section Baseball 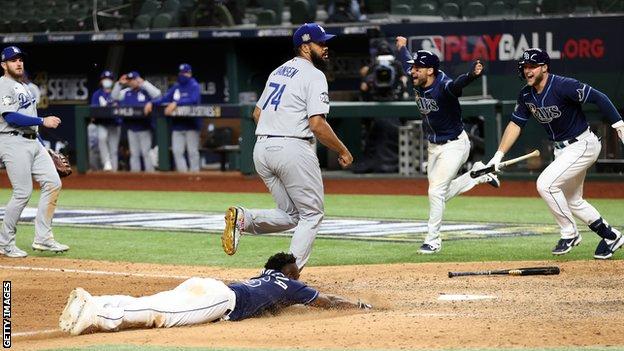 Randy Arozarena, who hit a record-breaking ninth home run of the post-season in the fourth innings, dived in to win the game for the Rays

The Tampa Bay Rays levelled the World Series as they clinched a dramatic 8-7 win against the Los Angeles Dodgers in the final play of game four.

Arozarena capitalised on a fumble by Chris Taylor and a mishandled throw by catcher Will Smith.

The best-of-seven series is perfectly poised going into game five on Sunday.

The World Series is being played on neutral ground in Arlington, Texas, after the regular season was cut short by the coronavirus pandemic.

The Dodgers are bidding to end a 32-year MLB title drought after losing the Fall Classic in 2017 and 2018, while the Rays are aiming for their first crown in their second World Series appearance.

The Florida franchise, which began playing in the 1998 season, kept themselves in the hunt going into the final play after Brandon Lowe, Arozarena, Hunter Renfroe and Keirmaier had earlier hit home runs.

Phillips walked up to the plate with two men on and singled to centre field for his first career post-season score.

As Kiermaier raced across with the tying run, Arozarena stumbled to the turf turning for home and looked ready to be tagged out - until a throwing error allowed him to dive onto the plate with the winning run.

"We have no quit," said Keirmaier. "We have been doing that all year.

"We have been the comeback kids. To do it on the big stage makes it that much sweeter."