Never mind about the actual Premier League managers, the latest international break has been a nightmare for fantasy football managers - meticulously planned long-term strategies have gone up in smoke due to injuries and Covid-19.

So do you hold on to Mohamed Salah and rely on your bench players to fill in for a couple of weeks? Do you hope that Marcus Rashford and James Ward-Prowse are going to be fit to start at the weekend? Or do you just rip the whole thing up and start again?

This very scenario is why lots of managers (sadly not me) will have been saving their wildcards - and gameweek nine could be the time for you to play it.

So let's imagine I did still have my wildcard and I owned a squad worth exactly £100m with no extra funds in the transfer kitty, here's what I would do…. 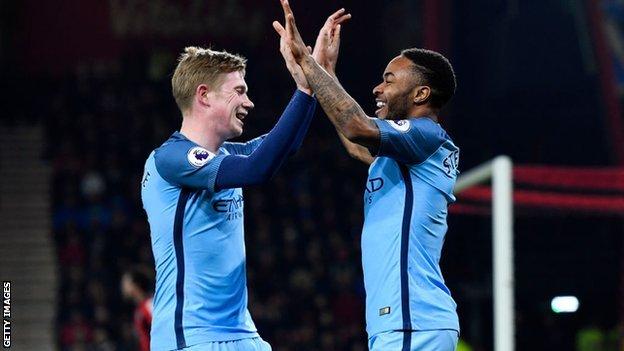 Kevin de Bruyne or Raheem Sterling? Which one are you picking?

The first four names on the team sheet were my four key midfielders and I've chosen Kevin de Bruyne over Raheem Sterling as my big-money Manchester City asset.

No Liverpool players you say? Well you could easily switch in Sadio Mane, Salah or Diogo Jota for De Bruyne or Bruno Fernandes but I would back my two choices to give me similar or better returns over the next six gameweeks.

Jack Grealish is a must given his form coupled with Aston Villa's promising run of fixtures and, although there is a slight rotation risk with Hakim Ziyech, his early Chelsea performances promise more big points hauls.

I would go for Jamie Vardy over Harry Kane purely because Tottenham's fixtures are starting to get a bit tougher and the Leicester City striker should also be a bit fresher having not been involved in the past week's international football.

I'd be happy to play 3-4-3 every week with this side given Ollie Watkins and Patrick Bamford are regular starters in free-scoring teams - although Tomas Soucek will chip in with the odd goal for West Ham if you wanted to go 3-5-2 or 4-4-2.

The money's obviously been saved in defence but it's not going to let this team down.

Ben Chilwell is averaging a little more than eight points per gameweek in a much more stable Chelsea backline since the arrival of Edouard Mendy and Thiago Silva. It's noticeable how much he's being encouraged to get forward to pick up those attacking returns.

Joao Cancelo is in there as I've been persuaded by Statman Dave's argument for him on last week's Fantasy 606 podcast. He has the nod at left-back for City at the moment, having started the past four Premier League games, and has created more chances from open play than any other defender.

Having a couple of Manchester City players in your squad looks a good bet with a favourable run of fixtures on the way and Cancelo could be your man if you can't afford both De Bruyne and Sterling - or if you don't trust putting your money on Gabriel Jesus or Sergio Aguero.

I've gone for both goalkeepers from Southampton - Alex McCarthy's been great value this season if you kept the faith after the 5-2 thrashing against Tottenham, but if he gets injured or dropped then Fraser Forster is ready to step in as a very capable replacement.

And there you have it... a wildcard squad ready to take on all comers.

For those with no wildcard left....

Sadly though, like lots of other fantasy managers, I've already played my wildcard so it's time to try and box clever over the next couple of weeks.

Jota could be a good choice at just £6.5m with Salah absent for the time being - and the same goes for Che Adams at £5.9m, with three goals in his last four games and Danny Ings out injured for Southampton. Another good shout would be Theo Walcott, who is classed as a midfielder but played up front alongside Adams in the 2-0 win against Newcastle and has brought in 11 points in his past two games.

And finally how about Tammy Abraham at £7.2m? Not the obvious Chelsea choice but he's started the past two Premier League games for the top-scoring team in the league and has provided two goals and two assists in his four starts this season.

Chelsea kick off our weekend at Newcastle on Saturday. Don't forget the deadline is at 11:00 GMT.