Last updated on .From the section Rugby Union 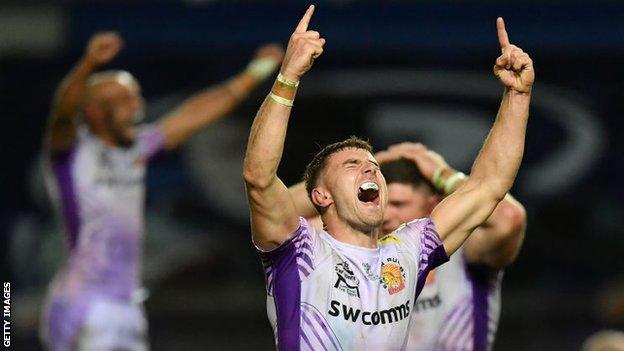 There was a moment when Exeter head coach Rob Baxter was waiting to do his post-match television interview on the touchline at Ashton Gate.

When the television director cut to him, he was still turned over his shoulder, his back to the microphone, to gaze adoringly at his team as they posed with their first Champions Cup trophy and sprayed the sponsor's best.

Baxter won't be looking back for long.

Much of the build-up to the final, won in nerve-jangling fashion against Parisians Racing 92, focused on his team's decade-long climb from second-tier wannabes to European royalty.

But that steady rise, splintering English club rugby's hierarchy, has been built on chairman Tony Rowe's season-by-season plans. Always looking ahead at how far still to climb, rather than stopping to admire the view.

Next weekend, and the chance to complete the second half of the Double in the Premiership final against Wasps, looms large.

But, as they travel home back down the M5, Baxter, Rowe and the rest might already be allowing their minds to wander a little longer term.

The recent history of the Champions Cup has been dominated by dynasties.

Leinster won it three times in four seasons from 2009.

Toulon won three in a row from 2013. Exeter are only too aware of Saracens' streak of success that included three of the past four titles.

For Baxter that is the challenge. But also the opportunity.

His mix, combining sons of the south-west - seven of the starting XV came through the club's academy - with a pinch of stardust in Scotland internationals Stuart Hogg and Jonny Gray is potent stuff.

With Saracens' past achievements called into question and their future thrown into doubt by the salary-cap scandal, Exeter are undoubtedly England's dominant club side.

Having seen off a star-studded Racing in the final and Top 14 champions Toulouse in the semi-finals, they will come into next season's title defence knowing they can turn over the best from across the Channel.

Off the pitch, they seem a distance clear of the rest as well.

Last season, they were the only club in the Premiership to return a profit. As coronavirus corrodes the games' finances, they are more stable than most.

The biggest threat to Exeter might, indeed, be their own success.

Baxter has already said that the 2020-21 rugby calendar, compressed by coronavirus and clogged with a backlog of international action, will make next season "very challenging".

His squad, several of whom were sat in the ticker tape phoning absent family after the trophy presentation, can expect England head coach Eddie Jones to be dialling their number and taking them away from Sandy Park for long stretches.

With George Kruis packing his bags for Japan and Courtney Lawes ruled out of the autumn with injury, uncapped second row Jonny Hill must be close to making an England squad for the first time since he toured South Africa in 2018.

Fly-half Joe Simmonds' intelligent kicking from hand, accuracy off the tee and captaincy at just 23 years of age marked him out as a game manager of quality.

Brother Sam Simmonds, who scored his 19th try of the season during the win over Racing and won the European Player of the Year award after, has the impetus that has gone missing from Billy Vunipola's game recently.

Luke Cowan-Dickie's relentlessness, Henry Slade's mastery of time and space in midfield, Jack Nowell's bottomless appetite for work - all stood out in the rarefied air of a European final.

Of course, Exeter have been here before. Don Armand and Matt Kvesic were championed by Chiefs fans, only to be largely ignored by England. Jones is not moved by public sentiment, his squad selections hard to second-guess.

But Exeter's cohesion at club level may add to all their players' cases for international inclusion.

But while Owen Farrell, Elliot Daly, Maro Itoje, Jamie George, Billy Vunipola and brother Mako have signed on to stay together, they are unlikely to play together for their club next season.

With Saracens relegated to the Championship, some have been linked with loans away. Others are using the time to rest up and stay fresh for international action.

Will it keep them sharp? Or dull their edge?

The Chiefs are first in line if the latter. And maybe, Jones will conduct some surgery, if not a full transplant, on that spine regardless.

Scoliosis: 'Children let down' by long wait for spinal surgery

MAIL ON SUNDAY COMMENT: Boris Johnson will need all his skills to reunite our fractured kingdom

Does Python Need to Change?

Scoliosis: 'Children let down' by long wait for spinal surgery

1. Staff representation of India in WTO secretariat stagnant in past 25 years