Coronavirus could drive the last nail into the mink fur trade

(CNN) As coronavirus tears through the world's mink farms , the pandemic is accelerating the shuttering of a controversial industry.

Earlier this month, the Danish government ordered the country's mink farms to cull more than 1 million of the animals following a series of Covid-19 outbreaks, and thousands of mink have died at farms in the US states of Utah and Wisconsin.

A total 3.1 million mink were farmed in the United States in 2018, according to animal welfare charity Humane Society International (HSI). Current advice from the US Department of Agriculture does not recommend culls of mink herds.

In July, Spanish authorities ordered a cull of nearly 100,000 of the animals for the same reason, and in May the Netherlands mandated coronavirus testing at mink farms after suspecting that one of the animals had passed the virus to a human.

The testing has led to the culling of an estimated 2.6 million mink in the Netherlands, according to HSI. While some mink died from coronavirus, most of the animals were culled due to concerns that they could spread the virus to humans.

Although fur farms are banned in many countries, millions of animals are killed every year for their pelts, which are used in clothing. HSI said that 60 million mink were farmed for fur around the world in 2018, with China accounting for 20.7 million of the total.

A recent conducted in the Netherlands found "strong evidence" that at least two people from four mink farms in the country contracted coronavirus from the animals, and study co-author Marion Koopmans, a virologist at ErasmusMC in Rotterdam, said that her team's research has confirmed mink-to-human transmission.

Studies have shown that ferrets are susceptible to coronavirus, so researchers in the Netherlands decided to look into the taxonomically similar mink during a routine animal testing program, said Koopmans.

"Researchers found that mink do transmit Covid-19 to each other more easily than other animals, Koopmans said. "It is amazing how easily this virus spreads in mink," she said.

Mink, which are closely related to weasels, otters and ferrets, appear to suffer similar Covid-19 symptoms to humans.

Difficulty breathing and crusting around the eyes are usually seen, but the virus progresses rapidly, and most infected mink are dead by the day after symptoms appear, according to Dean Taylor, state veterinarian for the US state of Utah.

Conditions at the farms mean the virus is able to rip through captive populations, said Jo Swabe, senior director of public affairs at HSI Europe. "The animals are being kept in small wire cages, there's just rows and rows and rows of them," she said. "The animals can't escape each other."

Mink are naturally solitary and semi-aquatic, and it's impossible to provide for their welfare needs on farms, according to HSI, which campaigns for the closure of fur farms on ethical grounds.

In the Netherlands, there is now ongoing transmission between mink farms, as well as evidence that the virus has been circulating for some time at some facilities, said Koopmans.

There are a number of hypotheses as to how transmission occurs, including via workers, semi-wild cats or other wildlife. "We're not really sure what happens," said Koopmans. "There is a missing link." 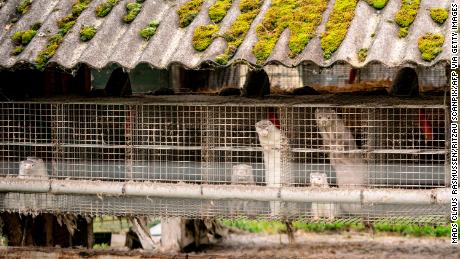 The Danish government earlier this month ordered mink farms to cull more than 1 million of the animals.

Koopmans has recommended culling mink populations to reduce the chance that farms become a permanently infected viral reservoir. She emphasized that she is not normally an advocate for mass animal culls but it's the best approach to prevent sustained transmission among mink.

"That's a risk that I think we should not be taking," she said.

If this were allowed to happen, and human-human transmission were suppressed, the virus could be reseeded from mink farms, said Koopman, who added that it's unclear whether the virus would change, with unknown consequences, if it were allowed to circulate in another species.

What next for the industry?

The European Commission has ruled out an European Union wide ban on fur animal farming in connection with Covid-19. But various national authorities have stepped in to mandate the culling of mink populations to prevent farms becoming a source of infection.

In Denmark, mink herds with confirmed or suspected infections will be culled, as will all farms within five miles of those facilities. The culling process will be handled by the Danish Veterinary and Food Administration and the Danish Emergency Management Agency, and mink breeders will receive compensation for the loss of their herd along with compensation for their operation losses.

"It is a difficult decision that the government has made, but we fully support it," said Tage Pedersen, chairman of the Danish Mink Breeders Association. "In recent weeks, we have all experienced that more and more farms in North Jutland have been infected, and no one has been able to explain the increase. Human health must come first."

The Netherlands is also paying compensation for infected mink pelts that can no longer be sold. In addition, the country has fast-tracked an existing plan to phase out fur farming. Every mink farm was due to shut down by 2024, but the deadline has been brought forward to March 2021, according to Dutch 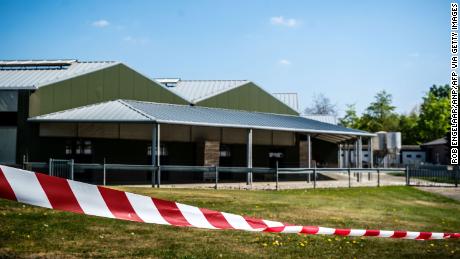 Barrier tape cordons off buildings of a mink farm at Beek en Donk, eastern Netherlands, on April 26 after tests showed that animals had been infected with Covid-19.

Mink farmers will receive considerable compensation, which has stoked public opposition at a time of economic hardship for many, but the decision has accelerated the end for mink farming in the country and saved millions of animal lives, said Swabe.

Fur farming has been banned for years in countries such as the UK, Austria and Croatia, with other European nations following suit.

France announced last month that it would ban farming mink for fur by 2025. Poland looks likely to ban the breeding of animals for fur after a bill introduced by the ruling Law and Justice party sailed through the lower house of parliament in mid-September.

The pandemic struck at an already difficult time for the fur industry, as fashion designers use less of the material. Calvin Klein was one of the first major designers to ban the use of fur in the 1990s, and it has since been joined by a raft of big brands including Prada, Chanel, Burberry and Versace, according to research conducted by HSI, as consumers increasingly turn away from the product on animal welfare grounds. Pelt prices have also in recent years, and many are going unsold, said Swabe.

While the fur industry faces tough times, in general, Swabe predicts that Denmark will be the last holdout. The country is the world's largest producer of mink skins, almost 19 million per year, . It is home to Kopenhagen Fur, the largest fur auction house in the world.

However, in other fur-producing nations the compensation deals on offer may prove to be a good way out for those involved in the industry, while the effects of the coronavirus pandemic may drive farms out of business even before the recent spate of legislation comes into force.

"I really do hope that will put the final nail in the coffin," said Swabe.